Picture on left from: DNW Auctions, UK Date: Dec 7, 1935 Picture on right: Was taken when JOCO finally got his pilot's licence towards the end of WW1 - although obviously he had been flying as an Observer since 1915-16.

THE STORY OF THE MEDALS

Our Family history tells that CAPTAIN J.O.C. ORTON had two set of medals issued, due to the first set being stolen and a second re-issued set which aldo unforunately went missing. The following transcript and the above medals pictured shown come from an Auction House sale in 2011 where the original medals showed up for sale. Interestingl, the full set, it appears, actually included one of the re-issued medals.

‘For conspicuous gallantry and devotion to duty during three months’ operations. He showed splendid qualities as an Observer and rendered most valuable service. His intimate knowledge of the country enabled his reports to be most accurate throughout. He was three times in action against enemy aircraft, and on the last occasion returned with twenty bullet holes in his machine, after one and a half drums of ammunition from the Lewis gun had been emptied at the adversary.’

John Overton Cone Orton, who was born in St. John’s Wood, London in August 1889, was commissioned as a 2nd Lieutenant in the Norfolk Regiment in November 1909 and was serving out in India with the 2nd Battalion at the outbreak of hostilities in August 1914. Subsequently engaged in the Mesopotamia operations, he was present in operations on the Tigris and was wounded at Shaiba in the following year, and evacuated to Bombay.

Seconded for service with the Royal Flying Corps in December 1915, Orton served as an Observer in No. 30 Squadron out in Mesopotamia until September 1916, gaining the M.C. and a mention in despatches (London Gazette 19 October 1916 refers), in addition to the 4th Class of the Serbian Order of Karageorge (London Gazette 15 February 1917 refers): accompanying extracts from No. 30’s war diary reveal a number of reconnaissance sorties and a supply drop to the beleaguered garrison at Kut.

Appointed to No. 39 (Home Defence) Squadron on his return to the U.K., and having qualified as a pilot in April 1917, Orton was “scrambled” on at least one occasion, namely a Goths raid on London on 13 June 1917. Subsequently employed at the Air Ministry from April 1918, he returned to regimental employ with the 1st Battalion, the Norfolks in Ireland in January 1920, but shortly thereafter was posted to the regimental depot in England and thence as Adjutant to the 5th (Territorial) Battalion. He was placed on the Retired List in January 1925.

The Medals were 'Sold with copied service record and MIC entry, the latter confirming that his 1914-15 Star was replaced in January 1955'.

Note: Orton family sources also include anecdotal stories of JOCO having provided reconnaissance mapping of enemy territoryas part of a warfare initiative enabled by the new aerial capabilities provided by such airmen and 'Observers' as JOCO. - CAW, 2019

“In 1917, JOCO would have been 28 years old, so in fact he did not enter the film industry professionally until 1925 when he was 36 years old. It seems that many creative high achievers of that era had been through the theatre of war before becoming film makers and certainly the mood of the times is caught in many of the era's silent films: satire, cynicism, technical experimentation, love of cars, trains, planes. As well as the many war films JOCO gravitated towards with British Instructional Films (BIF), after his 1909 -1925 military career, he became a 'film' ambassador working with a spirit of creative alliances across Europe. "He gained a considerable measure of credit for forming the Anglo-Swedish-Film-Aliance", (Source1) Meanwhile, USA went its own wayestablishing its own film industry- until at least the mid to late 1930s and after - often censoring British content and using different technologies.

JOCO's original mentor, producer Michael Balcon, was all for making stronger alliances with the USA after success Europe in the 1920's, initiating a number of joint productions between British Gaumont and start-up American film companies such as Fox. The joint British-Gaumont and Australian production of 'The Flying Doctor' was set up in this spirit by (Sir) Michael Balcon and the British company paid for the first state-of-the art soundstage to be built in Australia at Pagewood in Sydney. Just to mention that despite the film not being the international success "showcasing Australia to the world" that all hoped for, eventuallly Michael Balcon was able to back another Aussie company in the 1950's that finally got 'all Australian' films such as 'The Shiralee' into serious contention in the industry.

In the meantime, the story of the aerial cigarette ration drops came to be known when JOCO came face to face with an Australian Federal Goverment contingent of Ministers in Melbourne - which included Colonel TW White - at a welcoming dinner to celebrate the arrival in Australia of JOCO and the crew keen to make 'The Flying Doctor' with its 'all Australian storyline'. - CAW, 2019 - Read: Story on webpage 'Siege-of-Kut' . 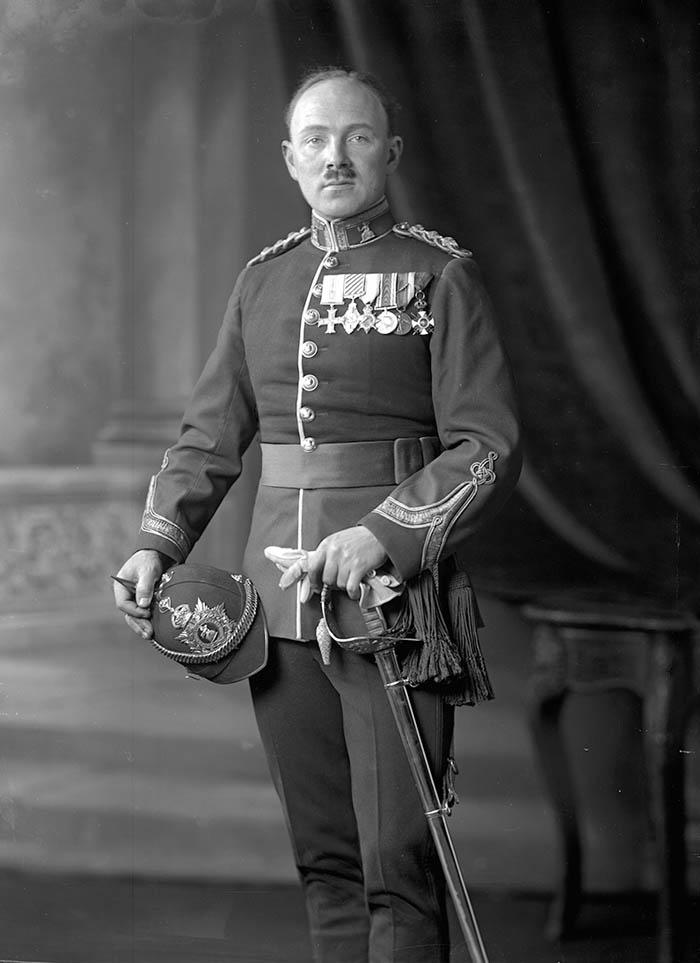 Initially appointed a Flying Officer (Observer) in January 1916, he was seconded to No.30 Squadron, RFC, in Mesopotamia, where the Norfolk Regiment were then serving. While with them he received the Order of Karageorge, 4th Class (with Swords) from the King of Serbia.

Issued a Flying Certificate (RAeSoc) 30 April 1917, he was part of Home Defence with 39 and 76 Sqns before being made up to Squadron Commander (temp. Major) on 9 February 1918, when he assumed command of 199 NTS at Retford.

He was awarded the Military Cross on December 1918 (Gazette Issue 31043), for actions in Mesopotamis:"For conspicuous gallantry and devotion to duty during three months’ operations. He showed splendid qualities as an observer and rendered most valuable service. His intimate knowledge of the country enabled his reports to be most accurate throughout. He was three times in action against enemy aircraft, and on the last occasion returned with twenty bullet holes in his machine, after one and a half drums of ammunition from a Lewis gun had been emptied at the adversary."

He relinquished his RAF commission in December 1919 and returned to Army Duties with the Norfolk Regiment as Adjutant, retiring in January 1925.

Then it gets interesting with his career as a film screen writer. At last count I had him associated with 55 individual films, from early Gainsborough pictures in 1925 , making Australia's The Flying Doctors film in 1926, to Will Hay films of the thirties and forties. Still writing for the screen into the 50s, he died during May 1962". (Written by Lafayette)