“CAPTAIN J.O.C. ORTON has been taking a good look at Australia for a month now with the Gaumont-British unit working in association with National Productions Ltd. to make “The Flying Doctor”, and he is awe-struck!

Like thousands of other Englishmen who have never, or never previously seen the country, Orton imagined Australia to be something of an outsize in farms, sub-divided in a big way.
“Quite frankly”, he confessed to us, “I expected to find Perth a scattered settlement of slab huts for the most part, with the landscape dotted with gold mines… The city itself and the neat and pretty bungalows of the residential sections fairly took my breath away. And that was only my introduction to Australia. Progress round the coast to Adelaide, Melbourne and Sydney only increased my amazement and admiration.  Your development here is an epic story.  To think that out there only a few miles”, he added, with a sweep of the arm indicating the interior, “there is pastoral and agricultural life on millions of acres in the bosom of Nature, and like a flash you come into a city of the size, beauty, culture and hospitality of Sydney—well, “its terrific to me!”
“That sounds as if you scent plenty of screen material here” we said. “The country is teeming with material! Australia needs production. You have plenty to tell the world which when wrapped up in the dramatic medium will make a big impression across the seas,” he answered significantly.

Adapting the Script to “Local Color”.
“How much of that will you use in the ‘Doctor’?” we asked.
“A lot. Your pastoral industry, agriculture, scenery, surfing, the Sydney Harbour Bridge, possibly the Great Barrier Reef and of course your flying medical service.”

The script of “The Flying Doctor” was O.K.’d in London before the G.B. unit left, but job of injecting local color is keeping Orton busy right now studying locales more closely.  He expects to go as far afield as Cloncurry, Queensland, to plant the flying service angle in to the story with authenticity, as this takes the form of a strong dramatic climax.

Otherwise, the original story of Robert Waldron has been very freely adapted, as a matter of fact.  Orton also figures on a symphonic background treatment similar to that which gave “Tell Me Tonight” / ”Be Mine Tonight” (1932) the musical such fluidity.  He was assistant director on that production and thinks the same treatment will lend itself admirably to the local picture.

Finished in March.
As fast as sequences of the original script have been adapted to the native soil, they have been handed over to director Miles Mander, upon whom falls the ultimate responsibility of making the words live as entertainment for the world’s movie millions. Mander, whose reputation also preceded him to Australia, has been working on those sequences in a Darlinghurst flat, where some important preparatory work could be done, while good-looking T. Conochie, unit production manager, has been readying all routine for production next month, according to plans at the moment, at National Studios, Pagewood (Sydney).  The picture is expected to be completed in March (1936).

Old Association Renewed
The assignment of Mr. Mander and Captain Orton to “The Flying Doctor” renews a very old and interesting association.  Many years ago, Orton was attracted to the prospect of a studio career, and it was Mander who introduced him to Micky Balcon and his first assignment! Since then Mander has been to Australia and back to England, to Hollywood and back to England, directing, acting and writing, and keeping the “free leg” that he prefers.

Orton on his part has risen in screen writing experience and ability, going to the Swedish Biograph Company as story editor-in-chief, to Germany with UFA, then back to England as a director with British Instructional Films. When talkies came B.I.F. bought out the latter concern, and a little later Orton re-joined Balcon.  He was Gaumont’s first scenarist and today ranks as perhaps the No. 1 man in his line in England.  Recent stories and scripts readied by him for production by Gaumont have included the Jack Hulbert comedies, “Brown on Resolution”, “Soldiers of the King”. “Just Smith” (with Tom Walls) and many others. For a change he will direct again on returning to England.

Now, after the best part of twenty years, that old association is renewed at the other end of the world, and again in a pioneering field! Alan Williamson --- whose association with the British industry goes back pretty well to the cradle, as his dad founded London’s first print developing business --- has also renewed an old association with Orton and Mander, which goes back to the struggling days of which many stories are still told over the whiskey and soda!

Loyalty to Gaumont British
One thing the G.B. unit has notably in common is an affection for Michael Balcon, G.B. production chief. He is “Mickey” to the bunch, and they know his great ambition is to make Broadway more Mayfair-minded, and the millions toiling in lesser places more appreciative of the international product of the Gaumont studios. From Mander to chief cameraman Williams, the team making “The Flying Doctor” will do their utmost to send “Mickey” back a good picture, making a great production experiment well worthwhile.  If they do, not only Sir Hugh Denison and his co-directors of National Productions Ltd. will cheer, all Australia will join in!"

JOC Orton is seen here sitting next to Col. Hon Thomas Walter White, Minister for Customs.  The two had both been aviators in the first combined AFC's in service in Kut and Basra in the Mesopotamian scenario of World War I.  (1915-1918)

In fact, there are press clipping about an extraordinary story of an aerial drop of cigarettes made by JOC behind enemy lines to the captured Regimental forces, but in deliberate contravention to orders given by Colonel White and General Townsend. The story of the cigarette drop at Kut and Colonel White is on the Medals page under Biography.

"Though I am the least important part of this adventure, a word about me, since I began it.

During a “pretty” submarine escapade aboard the Strathnaver en route for Australia, I collided with a jovial man—he was Captain J.O.C. Orton.

He forgave me and we chatted.  He told me that he was looking for a secretary, and asked me if I was qualified for the job. Supplying negatives to his interrogatives I eagerly confessed an ability to pen the rapid line and a desire to know how to type. After his next dive, my Big Boss, taking me on faith, inquired: “Will you begin this afternoon?”  So, I became a secretary, a machine recording a great scenario-writer’s mind in action.  And it turned into a delightful experience.  My job soon became my day’s interest and I ended it, not a jaded typiste-stenographer, but bright-eyed with the glamorous stories that I was told of his life, his rise to success, his philosophy, his friendships.

As I ponk, ponk, ponked on the keyboard while the tropic shadows fell, I began to feel the little (yet definite) wavelet that I was in the big wave that J.O.C. Orton is about to break and boom with Australian seas on the film shores of the world.

'JACK AHOY' STORY
“Jack Ahoy” (1934) was a whimsical Nature’s child, born of boredo" .“I was fishing in Norfolk” he recounted, “in some sandy shallows, at the point on one of those capricious rivers where it nearly joins the sea, then changes its mind and turns inland.  I hate fishing, and was very bored, and eventually lay back in my boat and fell asleep.  When I awoke, an hour later, the tide was out and the boat and I were stranded on a sandbank.  Meditating on my plight, I suddenly saw, in imagination, a submarine in a similar enforced static state. I visualised the crew, thinking that they were stuck on the bottom of the ocean….devising all sorts of schemes of escape to safety…..and then discovering that they were on a sandbank, above the surface of the sea. What a fish I’d caught!” 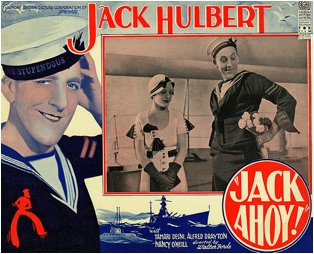 ‘Talking of “Jack Ahoy” J.O.C. recalls another of his stories, of how Nancy O’Neil had her first “big break”.

There was a movement to teach film-acting at the Royal Academy of Dramatic Art, and Captain Orton, ever interested in young talent, was in charge of the course of lectures and practical experience.

The students were taken to a film studio and given experience in acting before the camera.  One of them was Nancy.  Her talent was outstanding, and she was remembered.

A year later, having again returned from Australia, she was standing in a long queue, almost despondently waiting for an audition.  Captain Orton happened to pass, and remembering her face, asked if he could help.  She explained her patient wait and he at once telephoned to the man who was giving these actors their auditions.  Nancy walked straight in, and came out with a “lead” playing with Jack Hulbert, the envy of every eye.

TO PORTRAY US AS WE ARE
Australians will be glad to know that J.O.C. Orton, the man has a genuine desire to depict our life as it is (and as we would hope it is).  His sincerity will rapidly make itself felt.  His interest in Australia and his admiration for her pioneers is as limitless as our far horizons.  He admires the Australian physique and sense of freedom. “Do you think they will like me?” he asked simply. I assured him on our behalf, that it was inevitable, that we always “fell” for sincerity and geniality and simple tastes.

A scenario-writer, I learnt, must have years of experience in film studios. He must work his passage for years as an “editor” in the “cutting” rooms, learning how films are made, sequences of pictures joined together and cut.  Then he must spend years “on the floor” studying the dictates of directors, how they want cameras to be placed and moved, etc. I was also assured that a scenario-writer who is really worth his salt must have had experience as a producer himself, so that he can appreciate another producer’s reactions to his stage directions.

I learnt that the scenario-writer has a very different task from the playwright, whose first act must end on a crescendo, with a breathless effect on the audience, whose second must end similarly (but for very different reason—because the critics and producers always leave at the end of the second act), and who third must satisfactorily clear up the mess and restore calm.  The scenario-writer must lead, be gradual crises, entangling the evidence and confusing the issue for a steady hour and a quarter, to the one big moment when fears are dispelled, expectations realised, and tension removed; when the audience bends for its hat, and, “peanuts and chocolates,” says the boy upstairs.” - Article by Fyvie Dawson, November 1935

Two Interviews with JOC Orton in which he reflects on an upcoming Australian / British production and discusses his career with Fyvie Dawson en route to Australia in 1935.